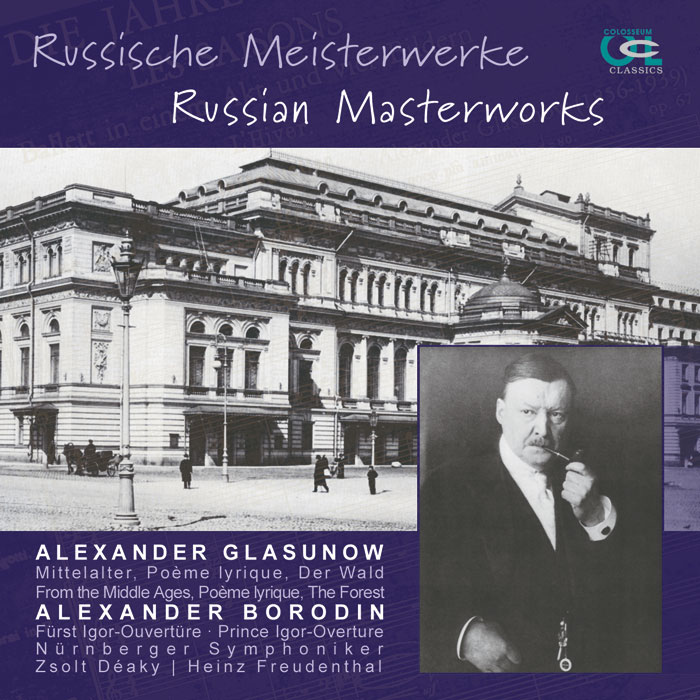 Alexander Glazunov, musical prodigy that he was, had five musical godfathers, all of whom had good reason to be proud of their protégé. He was only 16 when he attended the premiere of his first symphony; his musical memory was prodigious, and, whether as a teacher and director of the St Petersburg Conservatoire or later, when in exile in France, he attracted much attention with his ever-elegant music, which often resembled a watercolour painting.

In collaboration with the Nuremberg Symphony Orchestra, Colosseum was quick to turn its attention to some of this unusual composer’s lesser-known compositions – at a time when the concept of a “niche repertoire” had not even been invented, because all the big recording companies were still concerned to record the mainstream works. This much-admired Nuremberg collaboration resulted in three CDs. All of them astonish listeners with the composer’s richness of invention, breadth of musical subject-matter and indefatigable zest for particular colours and forms. Here we have two early works, the Poème lyrique op. 12, written when Glazunov was 19, and the orchestral fantasy The Forest, op. 18, written at the age of 22, placed alongside the later suite From the Middle Ages op. 79 – a juxtaposition that shows that the composer was able to realize his childhood dreams in adulthood with ever greater technical perfection.

Another amazing piece is the overture to Prince Igor. Borodin, one of Glazunov’s “godfathers”, had begun work on this opera but was clearly not going to be able to finish it, and Glazunov, having heard Borodin play it through once on the piano, later reconstructed it from memory.