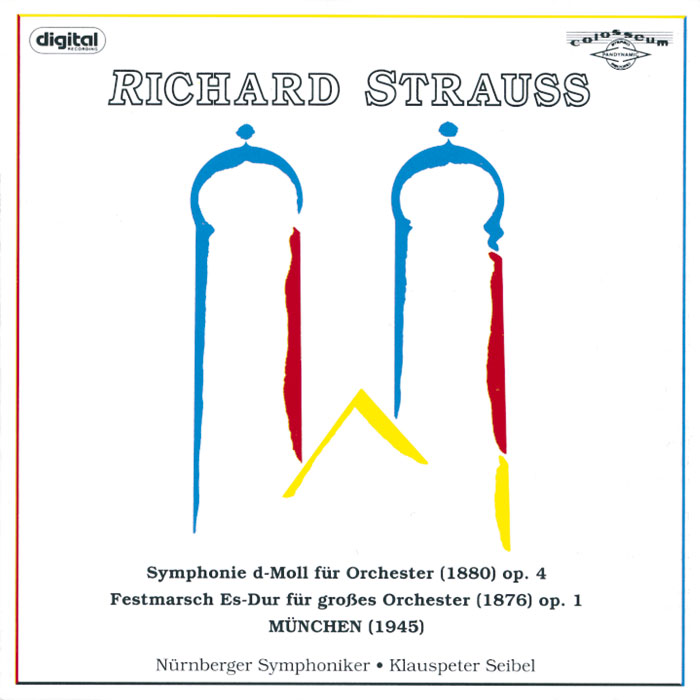 There are still scores to be discovered among the multitude of Richard Strauss’ oeuvres which have not found a place in popular concert repertoires. The three pieces in this recording span the entire range from his earliest compositions to his late work – from the Festmarsch composed in 1876 to the Symphony in D minor in 1880 to the second version of the Gedächtniswalzer MÜNCHEN in 1945.

The student’s pranks of genius are by no means fainthearted attempts and therefore cannot be written off to youthful mischief. At the early age of twelve Richard Strauss already astonished everyone with his tremendous talent demonstrated by the Festmarsch and then four years later as a master of the form in the Symphony in D minor. He was able to deftly transform his effusive ideas in10 compositions.

The impetuous 16 year old drew on the unlimited resources or the symphony, made excellent use or the late romantic musical language and was already able to arrange extremely colorful scores. And at the same time this bold beginning almost marks the farewell from the classical type of symphony since he later preferred composing “symphonic poems” in free form.

The significant traits or character which would shape his further development were already clearly evident in the Symphony in D minor – eight years before “Don Juan”, the start of the new series. In Andante, for example, there is a loosely dabbed elegance, a tingling brio, an orchestral opulence which can only be called precocious. This symphony was performed for the first time in the Odeum in 1881 under the direction of Hermann Levi and was a success.

In 1881 Strauss’ father directed his private orchestra, the “Wilden Gungl” in the Festmarsch which was dedicated to the Munich brewery owner Georg Pschorr, who was an uncle of the composer. Under the motto·”the best is the enemy of the good”, Strauss hardly ever touched these pieces later – these being testimonies to a great beginning.

In 1939 Strauss wrote the Gedächtniswalzer MÜNCHEN as occasional music to a Munich movie which was never shown. It was a sparkling. emotional homage to his dear hometown. In February of 1945, depressed by the terrible destruction of the German cities and theaters (birthplaces of his opera children) caused by the war, the 80 year old took up the waltz again. In nostalgic reminiscence the second version became more polyphonic and heavier with a middle section in a minor key. A biographer called it a “Walt.7. Requiem”: elegiac yet with an optimistic principle of hope at the end just as it pulsates through the composer’s entire Lifework.