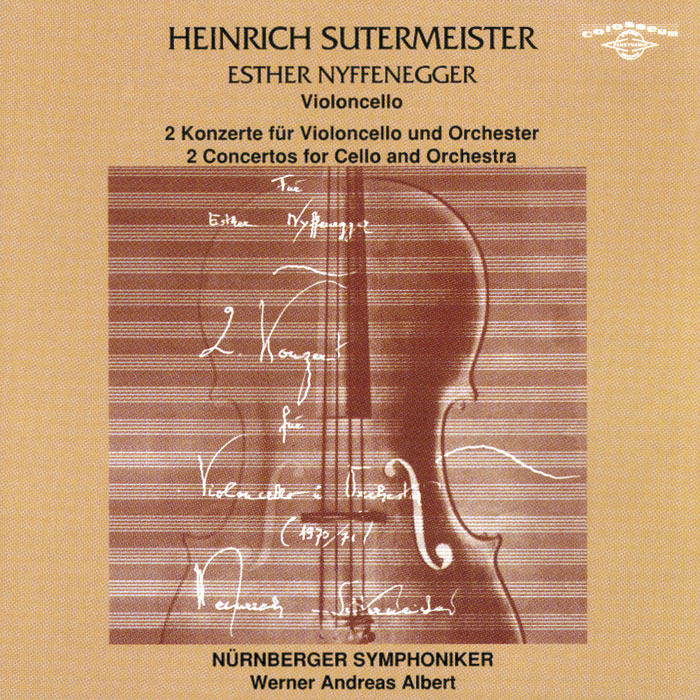 Besides his compositions for the music theatre (such as the opera “Romeo and Juliet”, first performed by Karl Böhm and translated into five languages, and “Raskolnikoff”, produced at La Scala, Milan) the 1910 born composer Heinrich Sutermeister has created for himself a world-wide reputation through his orchestral and choral works, among them the “Missa da Requiem” which was first taken care of by Herbert von Karajan.
Apart from three piano concertos he wrote the two cello concertos which are here recorded for the first time, the first dedicated to Ludwig Hoelscher (1963) and the second to Esther Nyffenegger (1972). In both compositions Sutermeister aims at “engaging the listener in a conversation”, the soloist functioning as mediator between the traditional symphony orchestra and the techniques, colours and forms of our present-day sense of music. In his use of the “aristocrat among the string instruments” (Pablo Casals) he intentionally avoids mannerisms and effects of alienation, constantly striving after sincere address and communication. Following Debussy’s famous statement the composer tries to present the tonal material so intelligibly and transparently as to allow the “naked emotion” (la chair nue de l’émotion) to impart itself to the listener. Thus, the two slow movements are unmistakably committed to the cello cantilena, this ideal synthesis between matter and musical communication which normally is only accorded to the human voice.
The shape of both these concertos can easily be understood by the uninitiated listener, too. Classical patterns (the sonata form, Lied, rondo, etc.) are modified from an undogmatic modern point of view. In doing so the German-Swiss composer who lives in the Lake Geneva area is obviously conscious of his role as mediator between the luminous southern orchestration in the French style and the graphic structure of the German quest for form.
The second concerto (composed in close collaboration with Esther Nyffenegger) was conceived in manifest contrast to the first. This is immediately proved by the orchestral makeup since the “full orchestra” of No. 1 is followed by a more economical orchestral body reduced to classical proportions. In both works, however, the soloist has the leading part and the orchestra is only a gentle accompaniment for the solo instrument.

Esther Nyffenegger, the soloist in both these works, was born in Zurich. Successful prize winner in international music competitions, she has undertaken several concert tours in the USA, in Canada, Mexico, South Africa and the Middle East as well as in almost all West European countries, appearing also as soloist with the Zurich Tonhalle-Orchestra, the Festival Strings of Lucerne and the Cologne Chamber Orchestra.