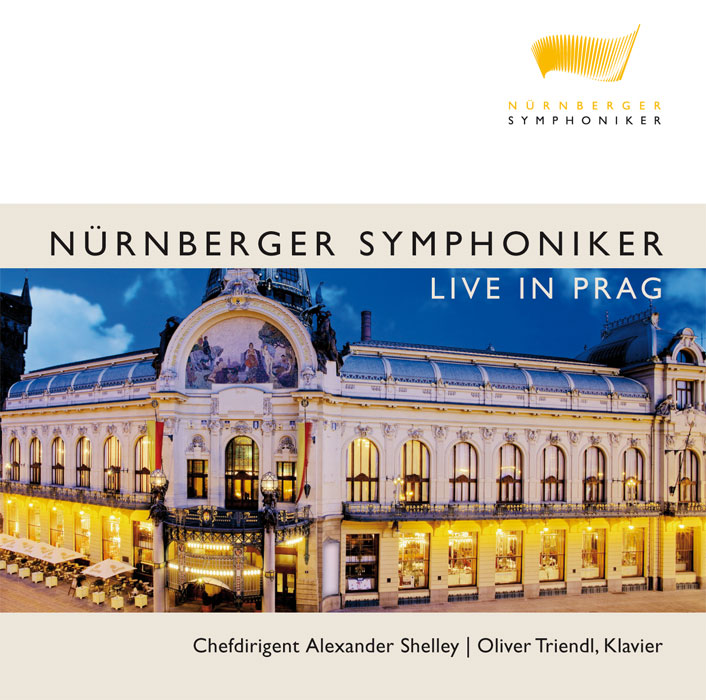 This live recording is of the gala concert which took place on May 25, 2010 in Prague’s beautiful Smetana Hall:

Relationships between Nuremberg and Prague do indeed go back to the Middle Ages, and it was already in the 13th century that the so-called “Golden Road” between the two European cities was an important trade link. It became more important following a decree by Emperor Karl IV that defined this road as being the mandatory route for Bohemian kings to follow when they wanted to travel to Nuremberg to attend the Imperial Diet or Imperial elections.
For many years, the Nuremberg Symphony Orchestra has been committed to taking the great and grand cultural tradition of Nuremberg out into the world as its musical ambassador. Thus – twenty years later – it was both an honour and a duty for the orchestra to follow the route to the Golden City on the occasion of the celebration of 20 years of partnership between Nuremberg and Prague.
This live recording is of the gala concert which took place on May 25, 2010 in Prague’s beautiful Smetana Hall. It is not just a document but is indeed proof of the artistic excellence that has already come to fruition during the first season of artistic cooperation between the new Principal Conductor Alexander Shelley and “his” Nuremberg Symphony Orchestra.

Nuremberg Symphony Orchestra, Alexander Shelley, Oliver Triendl
LUDWIG VAN BEETHOVEN   PIANO CONCERTO NO. 5   IN E-FLAT MAJOR NO. 5 OP. 7 3
In English-speaking countries, Beethoven’s piano concerto no. 5 is known as the “Emperor Concerto”. This epithet, which does not originate from the composer, refers on the one hand to the heroic and majestically-grand character of this piece (which is typically written in E-flat major – the same key as “Eroica”) and on the other hand to the circumstances of its composition. In a manner of speaking, Beethoven composed the concerto ‘under fire’ when Napoleon was bombarding Vienna with his artillery in 1809 and subsequently marched into the city. It was these circumstances that led musical researcher Alfred Einstein to refer to the E-flat major concerto as the “apotheosis of the military concept”.

Nuremberg Symphony Orchestra, Alexander Shelley
LUDWIG VAN BEETHOVEN   SYMPHONY NO. 6    IN F – F L AT MAJOR OP. 6 8 “THE PASTORAL”
The Pastoral is possibly the most unusual of Beethoven’s “grand nine”, beginning and ending as it does like no other of its sister works. The opening is as relaxed and light as the closing is upbeat, serene and indeed beatific. No dramatic opening gesture at the beginning, no spectacular closing high point at the glorious end. Whilst the fatalistic, heroic and dramatic Fifth Symphony represents a confession to all of mankind by a politicallyactive composer, the lyrically mellow Pastoral is the private natural idyll of an urban soul who values and enjoys the peace and solitude of rural life. But nevertheless: this ostensibly ‘sweet and lyrical’ symphony naturally packs quite a punch and is said to offer an explosive nudge into the future.