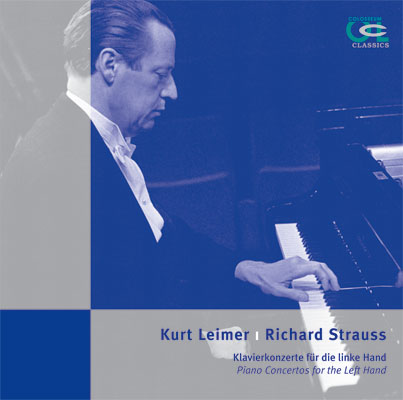 Kurt Leimer’s talent was discovered in his youth when Carl Schuricht, Wilhelm Furtwängler and Walter Gieseking, among others, highly praised his piano playing during a prelude. They deemed him »worthy of any possible support« to become a concert stage pianist. Kurt Leimer’s first public appearance was in 1938 in Berlin, when he was eighteen years old, after he received a scholarship and joined the class of the Rachmaninoff student, Wladimir Horbowsky, at the Berlin conservatory. A further scholarship enabled him to continue his studies with Edwin Fischer in 1939. The emerging glamorous career of the young pianist was interrupted by his being forced into military service and being imprisoned in Livorno. With war injuries as a backdrop, Kurt Leimer created his Konzert für die linke Hand in einem Satz in 1944. In 1953 he performed it with the Vienna Philharmonic Orchestra conducted by Herbert von Karajan. His career as a concert pianist and composer began after WWII and, today, it is impressively documented in numerous sound and film recordings.

Kurt Leimer’s piano talent was notably championed by Richard Strauss, who dedicated his concert for piano and orchestra (left hand) Panathenäenzug op. 74 (1926-27) – originally composed for Paul Wittgenstein – to him. Kurt Leimer had performed this piece with his own cadenza (sanctioned by Strauss) and Strauss’ Burleske for piano and orchestra conducted by Ernest Ansermet during the Salzburg Festival in 1947. Richard Strauss’ enthusiasm for the young pianist was captured in his letter of April 21, 1947 in which he said, » Leimer is a first class virtuoso, outstanding musician, his techniques sensational …«.

In 1953 Kurt Leimer was appointed to the Akademie für Musik und Darstellende Kunst Mozarteum in Salzburg, where he held a professorship until the end of his life.

In 1955, Kurt Leimer composed his Klavierkonzert Nr. 4, which was first performed under the baton of Leopold Stokowski at Carnegie Hall in New York.