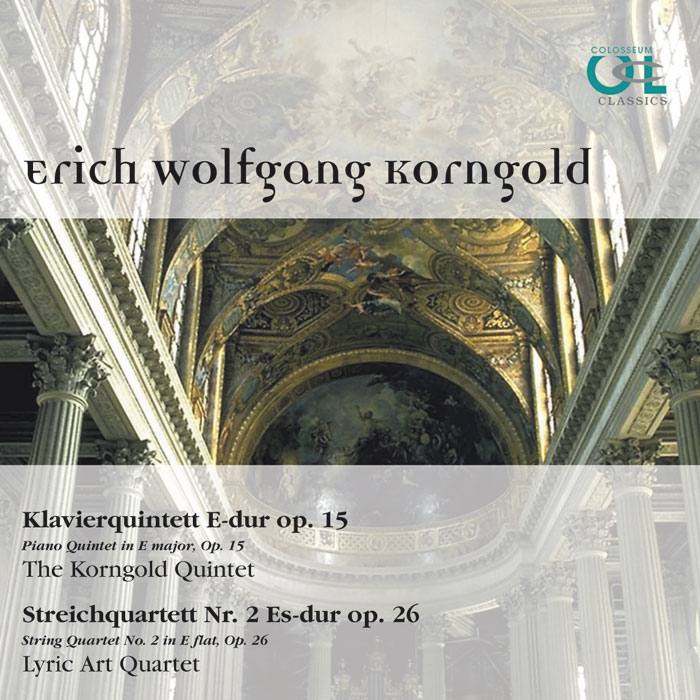 A child of the Jugendstil is unleashed on the world: two important works of chamber music by a carefree child prodigy, Erich Korngold.

As one of the top addresses for lovers of film music, Colosseum is more or less duty bound to find room for one of Hollywood’s outstanding 20th-century composers, who was also a great composer beyond the realm of celluloid. Erich Korngold had already made his mark as a successful composer of operas, concertos and chamber music before Max Reinhardt invited him into the American film studios for his delightful film version of A Midsummer Night’s Dream and the erstwhile child prodigy built up a new career for himself with his brilliant intelligence while horror reigned supreme in the Old World.

Lovers of romantic music will now be able not only to order the classics of the big screen, from Sea Hawk to King’s Row, from Colosseum but to also find a selection of instrumental masterpieces from the pen of this lifelong late-romantic composer, in whose deeply musical hands much was already sounding nostalgic long before anyone could have guessed how great the longing for the tunes of yesteryear would grow to be. In the field of chamber music in particular, the “likely breaking point” can be clearly sensed: Korngold’s Piano Quintet op. 15, dating from his successful early years in Vienna, points forward, with multiple quotations from his own works, to the end of the good old days which in the second string quartet op. 36, written in the years immediately preceding his exile, had almost completely evaporated, yet which continued to gleam beguilingly like gossamer in a kind of musical afterglow.